Exploration of Moroccan Culture through Music

Moroccan Culture and its Music

The Amazigh, or “free men”, are the indigenous population of North Africa.   These “free men”, also know as Berbers, maintain their identity by proudly protecting their language, culture, and traditions.  This heritage is passed down from generation to generation in the form of the arts.  Although influenced by nearby European and African countries, the art of the Berber people remains uniquely its own.

When Berber arts and culture, music must be included.  It is through music that emotions are expressed and it is an integral part of everyday life.  Although united by this passion for music, the Amazigh people are not homogenous and the music of each region reflects both their similarities and differences.  Let us now discover Moroccan culture by examining each region’s approach to music.

North and the Rif Mountains Region

The northern cities of Morocco — such as Tanja, Tetouane, and Chefchaoun — are known for their green mountains and wonderful beaches.  These Mediterranean cities with their white and blue houses were once colonized by Spain.  As a result, the Spanish and Mediterranean inflences are evident in their music.

Music in the north of Morocco is a mixture of the Italian violin, traditional percussions, along with the Arabic lute, Spanish guitar, and traditional flutes.  The most common style of music in this region is call Jabalia.  This ancient style of music groups men and women singers.  The percussion rhythm is slow and the singing is accompanied by the violin and lute.  The lyrics are often about love and immigration.

When the mountainous land is green and crops are growing, people appreciate life.  And when people appreciate life, it manifests in their music.  This is the case in the Middle Atlas.  This region has its own instrument a loutar.  This unique instrument is made by covering a piece of wood with sheep skin and then stringing it with four nylon strings.  This instrument sounds similar to the lute, but the way it is played by the Middle Atlas musicians make it melodically different.  This instrument is usually accompanied by  a traditional percussion instrument called an alloun.  A loutar band usually has three alloun players and a loutar player; the loutar player doubles as the singer for the group.  Often the loutar band incorporates a female singer or two, and on occasion, female dancers with beautiful traditional costumes accompany the group.  The songs are usually about love and social issues.

Sous is a region in southern Morocco that is bound to the north by Marrakech, the south by Guelmim, the west by the Atlantic Ocean, and the east by the Anti-Atlas Mountains.  The traditional instrument of this region is the famous ribab.  This old instrument originates from the Sous region and it is made, like the loutar, by covering a piece of wood with sheep skin, but it has only one string and is played with an arched bow.

The style of music played here with the ribab is know as rways.  Rways is played by bands of musicians that travel from city to city to perform.  It is not unsual for  Rways bands that meet in their travels to partake in battles.  The lyrics of this music are usually improvised and depend on the events of the day.

Other Types of Moroccan Music

This kind of music is an import from West Africa, invented by slaves who came by salt caravans to North Africa.  The slave origins is reflected by their performance which includes the use a metallic instrument called karkaba, which sounds like handcuffs, and a dance that resembles jumping as a way to obtain freedom.  The principal instrument in Gnawa music is the guembri.  Similar to the loutar and the ribab, it is a piece of wood covered by sheep skin, but with three strings made of camel intestines which produce a deep and heavy sound like a bass guitar.

Essaouira is becoming internationally known for its Gnawa World Music Festival which is held annually in May.  Every year, the city welcomes thousands of musicians who want to find inspiration from this spiritual style of music.

Ahidous is the name given to the style of music that most of the population of southeastern Morocco play in their celebrations (weddings, parties, etc.).  This music is performed with only alloun (traditional percussion) with men and women forming two lines of dancers and singing poetry.  Usually different bands from different tribes play ahidous with women of the tribe where the event is taking place, and it is an opportunity for single men and women to meet their future partner in life.

The music of the desert is more electric and spiritual, coming from the huge mountains of sand in Merzouga, Chegaga, and the Moroccan Western Sahara.  The music in these places is filled with the sounds of heavy electric guitar and African percussions called jambi, which brings to mind the image of camels slowly drudging through the dunes.  Singing about a cup of tea around the fire on a summer night in the middle of a peaceful land under a sky full of stars is common.

Abdelhadi “Amnay” Idrissi is a tour manager with Morocco Immersion Tours & Adventures. He is also a talented Artist, musician & song writer. His Berber heritage and his engagement with the Amazigh movement make him an authority on Morocco’s history and Amazigh arts. 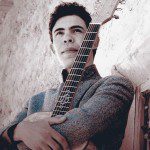 My First Trip to Morocco: The Idea Previous Entries

This site uses Akismet to reduce spam. Learn how your comment data is processed.